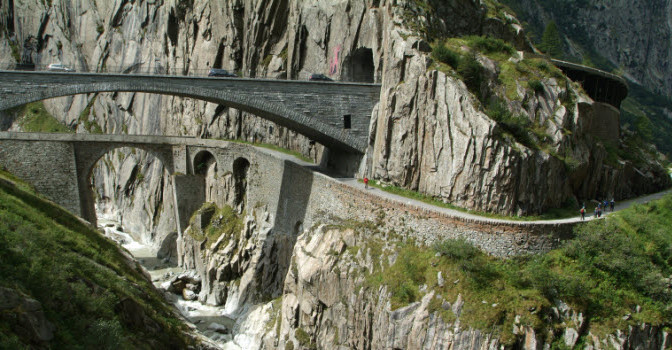 Andermatt, a municipality with some 1,350 inhabitants in the Swiss canton Uri, is located 1,447 metres above sea level. The village Andermatt can be found in the Ursern Valley south of the Oberalp Pass. At the end of the valley you can find the small municipality Realp with approx. 170 inhabitants, 1,538 metres above sea level. The east portal of the Furka base tunnel is located near the Realp train station.

From early history before approx. 4000 before Christ only a stony arrowhead and some Roman coins of approx. 300 before Christ are known about Andermatt. The first mentioning of Andermatt dates back to 1203.

The emblem of Andermatt shows a black bear with a red tongue and red claws on a yellow underground and a crucifix in the right upper corner. The emblem has been used by the municipality since 1968, the bear motive goes back to the name of the Ursern Valley, meaning Latin Ursaria = bear valley.

After the mountain pass above the St. Gotthard was made passable during the years from 1818 to 1830, Andermatt developed into a holiday and health resort and a trading centre. Only when an all-year connection was created with the opening of the St. Gotthard railway tunnel in 1882, the importance of the mountain pass decreased and Andermatt experienced a bitter economic decline.

Nowadays, Andermatt is a ski and health resort with a railway station at the railway line Matterhorn – St. Gotthard – Zermatt. The Oberalpstraße of 1864, the Schöllenenbahn of 1917, the Furka Oberalp Bahn of 1926 and numerous other railways and institutions have contributed to the economic recovery. In the municipality you can find the mountain service of the Swiss army where mountain specialists are trained.

About 86 % of the inhabitants are Roman Catholic and approx. 10% Reformed. In agriculture and forestry there are only few jobs left, the major part of inhabitants is employed in the service sector. You should visit the Pfarrkirche (parish church) St. Peter and Paul of the year 1602, the Mariahilf chapel of 1740, the Pfarrkirche (parish church) St. Kolumbans which was founded as a small chapel in the 9th century, the chapel Sankt Wendelin im Wyler of the year 1656, the Reformed valley church, the old and new Devil’s Bridge (Teufelsbrücke), the Urnerloch, the first road tunnel of 1708 and the valley museum Ursern of 1786, a building in late Baroque style. Vacationers can spend their nights at the Hotel Andermatt or at the Hotel Schwarzer Bär.