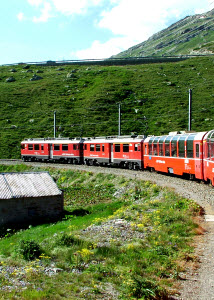 The Swiss trains Glacier Express and Bernina Express are known all around the world.  Lots of passengers enjoy the leisurely journey in the comfortable wagons of Retro-Romanian Railways.  The Bernina Express has been travelling between Switzerland and Italy with a high number of guests since 1973. The train journeys 145 kilometres of tracks heading south through the canton Graubünden.

The four hour journey to Tirano in Italy begins in Chur.  Don’t forget to have your travel documents handy, in order to avoid any difficulties when crossing the border!  The battle against the mountain world begins as soon as the Bernina Express reaches Engadin.  As the Bernina pass is overcome the power of the train reaches its peak.  The Bernina Express has to master climbs without any assistance, such as cog wheels, until this pass is reached.  The railways above the Bernina pass exist since 1910.  It took four years before the last tracks were laid.  The station Ospizio Bernina is the highest point of the journey (2250 m), although the course still has many highlights to offer!

The Bernina Pass and More Sensations of the Course

The Landwasser viaduct tightens near to Filisur and is held impressively by six arches over the gorge.  The Bernina Express Train then disappears into the darkness of a tunnel.  The Glacier Express also crosses this bridge during it’s journeys between Zermatt and St. Moritz.

Allow your eyes to gaze out of the large windows of the Bernina Express as the impressive Swiss mountain world goes by.  The Monteratsch glacier forms the landscape scenery for a long time, as the train precisely follows it’s journey.  One even sees the highest peak of the eastern Alps during the journey: the Piz Bernina, a 4048 metre high giant, made of rock.  Following Ospizio Bernina, the journey continues downhill only, the Bernina pass has been conquered.  One can enjoy the fascinating panorama of the Alps and the view into Val di Poschiavo from the station Alp Grüm.  Passing the Palü glacier and glacier lake Lago Palü belonging to it, the Bernina Express attacks its curvy route.

The Kreis viaduct near to Brusio belongs to the jewels of the Bernina railway route.  The Bernina Express travels in a wide loop towards the valleys.  The tracks lead in a circle and then between the bridge pillars out of the spiral.  The Swiss fast train arrives a few kilometres later in the Italian Tirano.