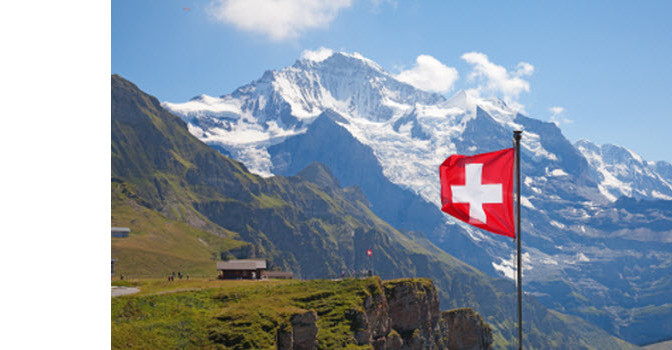 The Jungfrau (4158m) is the highest mountain of the trio Eiger, Mönch, Jungfrau in the Bernese Alps. Its peak was taken for the first time in 1811. Meanwhile, no less than 20 million people assaulted the Jungfraujoch, although in a less inconvenient way. Most people take the Jungfraubahn rail which has been departing in Interlaken since 1912 and which transports countless passengers to the highest station in Europe.

The alp region of Jungfrau-Aletsch-Bietschhorn was named UNESCO World Natural Heritage in 2001. With 24 kilometres the Aletsch glacier is the longest glacier or the alpine world. The surrounding area is interesting for many groups of scientists. It reveals information about the formation of the mountains and glaciers, animal and plant scientists find a unique flora and fauna at this place.

Research works have already been done in the Sphinx observatory high above on the Jungfraujoch since 1937. Its name derives from the rock on which the research station was constructed: Sphinxfelsen (Rock of Sphinx). Scientific investigations of different disciplines – from astronomy via physics to meteorology – find their start on the Jungfrauchjoch. Even since 1996 there has been a lookout point from where visitors can let their gaze wander across the Swiss mountains.

Interlaken as a central point of the Jungfrau region

Not only the Jungfraubahn rail starts from Interlaken into the mountains. Every year the Jungfrau marathon takes place. The sporting event leads athletes trough the Swiss landscape along a beautiful running route. The starting signal is given in Interlaken.

After a run through the city the route leads to the Lake of Brienz. When arriving at the village of Lauterbrunnen, the athletes have passed half of the marathon. Shortly after it goes bend after bend on serpentine roads up to Wengen. After further 10 kilometres and quite a few kilometres of height the marathon runner finally reaches the finish – the Kleine Scheidegg. For business people the journey to Interlaken may end in one of the rooms of the Grand Hotel Beau Rivage.

This five-star hotel is one of the most exclusive addresses in Interlaken. The Beau Rivage Interlaken entertains its guests lavishly and often provides its rooms for seminars and conferences. Who meets here for conferences can enjoy a fantastic view at the Jungfraujoch. After having finished work the pleasure follows! As a visitor of Interlaken you can choose from a wide range of different leisure activities, depending on personal preferences.