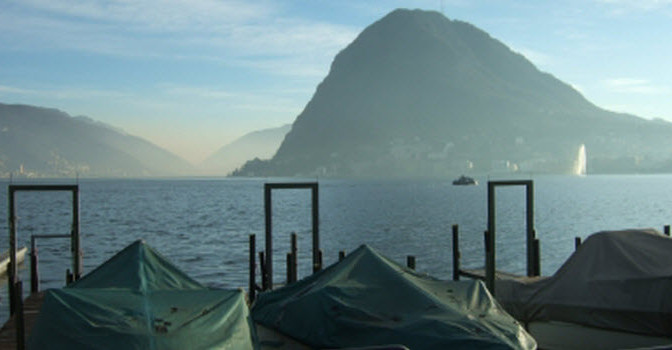 The Lago di Lugano or Lake Lugano in the canton of Tessin reaches to Italy. The major part of the ramified lake, however, is definitely located at the Swiss area. At some points the water is almost 300 metres deep. The Lago die Lugano captivates with its Mediterranean ambience and climate. In the warmer months vessels cross the Lake Lugano. By means of these vessels visitors are comfortably transported from their hotel at the Lago die Lugano to their chosen place of excursion.

From the peak of the Monte Brè (925 m) or the Monte Salvatore (912 m) near Lugano you can get a general view. You can get to know the nature by hiking tours. In the Swiss museum of customs in Cantine die Gandria you will be informed about smugglers and their attempts to outwit the customs. The Hermann Hesse Museum in Montagnola examines the life and artistic works of Hermann Hesse. In the Villa Heleneum in Castangola the culture outside Europe is the exclusive point of interest. Above all you will find artworks from Africa, Asia and Oceania. The adjoining park surprises with a variety of exotic plants.

A visit to the chocolate museum Alprose in Caslano is suitable not only for persons with a sweet tooth. You will learn a lot of interesting facts about the long history of chocolate! Already the ancient civilizations of the Maya and Aztecs produced chocolate. The exhibition tells about the discovery of the cocoa plant as well as of Christoph Columbus who brought the cocoa bean along from his journeys. He was the reason for the start of the triumphal procession of the sweet sin throughout Europe. Pursue the production of chocolate or chose delicacies of chocolate in the shop – for your own or take a sweet souvenir for the loved ones back home.

The Monte San Giorgio (1097 m) at the Lago di Lugano is almost strewn with fossils. Archaeologists have been working on the mountain for a long time to uncover fossilized animals and plants from the Trias. Therefore the findings are more than 200 million years old. They prove that the major part of the area was almost totally located in the lake in former times.

The museum of palaeontology in Meride with its primeval exhibits offers an interesting insight into the geology. A number of fossilized saurians, marine animals and plants were the reason for the UNESCO to pronounce the Monte San Giorgio World Natural Heritage in 2003. In case a visit to the museum is not sufficient for you, you can continue your studies during a hiking tour along the nature trail at the Monte San Giorgio.