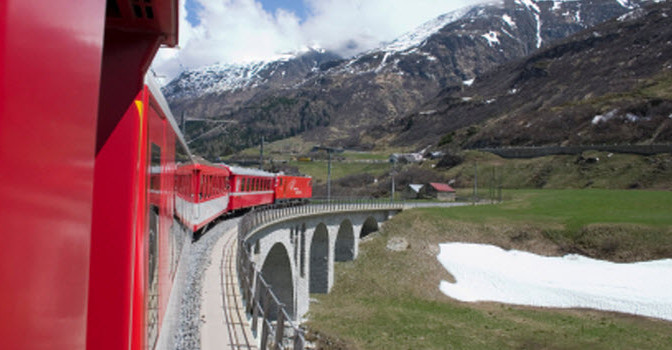 The amusing train trip with the Aqualino begins in the town of Landquart. The rails of the Rhaetish Railway lead through the Swiss Praettigau. This valley in the canton of Graubünden shapes more than 40 kilometres of the Swiss scenery along the river Landquart. In summer it attracts many hikers and other leisure sportsmen. Cat burglar will find a new challenge in the surroundings.

For visitors of the canton Graubünden there are also offered journeys/trips with the Engadin Star, Bernina Express train or the Glacier express train. In Klosters, the popular mountain village close to Davos, the Aqualino makes a short interstop, followed by the long darkness of the Vereina-tunnel. The tunnel leads about 20 kilometers through the mountain. Especially desired are journeys to Davos and Klosters in winter – of course because of the ski regions there.

Travel by Aqualino for recreation to Scuol

After the arrival in Scuol you will find yourself in the principal place of the sunny Swiss Unterengadins on a height of more than 1.200 metres. It consists of two parts: Scuol sura and Scuol sot.

If the inhabitants talk here, they do this in raetoromanian. However, also with other languages like German or English you will manage everything excellently. So, no fear of communication problems! Scuol is known, above all, because of his many mineral springs. Try the water, if pass one of the public fountains in the Scuol. Some of the springs are fizzy – a nice refreshment during a hot day.

An extensive bath day in the Engadin is relaxing spa Scuol. Pleasantly warm thermal water sweet-talks the skin, in the salted water the gravity of the body disappears – like a feather one floats on the surface, hot and cold baths stimulate the organism. A large sauna area is included in the offer of the water park. Who would like, can allow trained hands to remove last spannings by massage. Afterwards culinary delights from Engadin will spoil you: No matter whether substantial mountain cheese, Bündner-meat or the Engadiner nut cake – for every taste you’ll find something toothsome at Scuol Restaurants.